Getting Relief from My Addiction

Cody was born in 1992, growing up on a large piece of property with his family in Utah. There was always plenty of space to run around and explore when he was growing up. He grew up in a well-off family and remembers every Christmas. His family would have a huge party, and everyone in the neighborhood would come and mingle at his family’s barn property.

An active kid he got involved in soccer, tennis, baseball, lacrosse and wrestling. Once he got a little bit older, he became obsessed with motocross and began racing. After a while, he suffered a bad injury and had to be laid up for several months in a cast.

Once Cody got a little bit older, he started to struggle in school and began struggling with fitting in and after some time, he began to experiment with drugs. This continued into his adulthood. He would struggle holding jobs and before long started to really struggle with his addiction. After completing the Narconon program things have turned around for him and this is what he had to say:

“Going through the drug-free withdrawal was a lot easier than I thought it would be. It really helped me come back to reality and begin to feel better”

“Then I did sauna and the biggest thing the sauna did for me was it gave me mental clarity. Also, the damage I had on the side of my face from having an infection went away. I feel extremely healthy and have an increase in strength and stamina. I don't think I have felt this healthy in a very long time.

“The Objectives part of the program made me look at some of the things in my life—good and bad. It helped me see them through clear eyes and really let me start looking at some of my issues and it helped a lot with my anger.

“I learned how to talk to those I care about and changed my outlook on some of the relationships in my life. I realized there were some people in my life that I really did not need or want to be around. I also started to repair the damage I had done to my family.

“I have gotten relief by getting things off my chest that used to eat at me. I no longer feel the shame of holding it all in and I recognize I did wrong and am currently trying to change. I realized when I started to compromise my morals and who I really am. This gave me my self-respect back and the ability to stand up for what I believe in. I finally got relief from all the things I had done that would just sit in my head and torment me.

“I have gotten a lot out of everything I did during the program and have learned a lot from it as well. Going through each part—sauna, objectives, and life skills I feel confident I have put myself on the right track for my life.”

Narconon Louisiana New Life Retreat is celebrating its ten-year anniversary. In commemoration of 10 years of creating drug-free lives, we received proclamations from the Mayors of both Denham Springs and Baton Rouge. 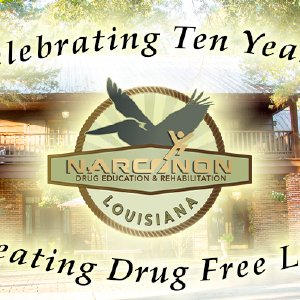