What You Need to Know about Fentanyl

Fentanyl is taking funeral homes by storm. Fentanyl, also known as Actiq, Duragesic or Sublimaze in its prescription form, is a potent painkiller developed in the 1960s to treat extreme pain. Some strains of Fentanyl can be 50 times more powerful than morphine.

According to a U.S. government report, Fentanyl has been traced back to illegal labs in China and Mexico. The drug is then trafficked to countries like the U.S., laced with heroin and sold to buyers who have no knowledge of the presence of added heroin.

Because Fentanyl is so potent, drug dealers have been progressively increasing the amount mixed into heroin, oxycodone or Xanax. This is deceiving to buyers who are unaware that a powder or pill contains Fentanyl.

U.S. Customs and Border Protection officials in Arizona announced Thursday, their largest-ever seizure of Fentanyl—254 pounds of powder and pills found hidden in a truck hauling cucumbers. A CBP canine team searched the truck and officers opened the false floor compartment to find 400 packages of an estimated $3.5 million worth of fentanyl.

“Fentanyl is potentially lethal, even at very low levels. Ingestion of doses as small as 0.25mg can be fatal,” states the US Drug Enforcement Agency (DEA).

Juan Mariscal, the assistant special agent in charge of Immigration and Customs Enforcement’s Investigative Unit in Nogales, said, “One kilogram of fentanyl produces 1 million fatal doses”. This means the load had enough Fentanyl for more than 100 million lethal doses of the drug.

According to the Georgia Bureau of Investigation, one strain of Fentanyl (furanyl fentanyl) is supposedly so potent, you could die just from touching it. Death rates of these synthetic opioids increased by more than 72 percent between 2014 and 2015.

More than 70,000 Americans died of drug overdoses in 2017—a record, according the latest available figures from the Centers for Disease Control and Prevention.

These synthetic drugs are cheap to make, are sold on the internet and sent by post, either directly to the US or to trafficking networks based in Mexico. In testimony before Congress, Assistant Secretary of State Kirsten Madison described the situation as the most “severe drug crisis” the US has ever faced.

The other problem is that as more restrictions are introduced, new chemical substances are produced to get around them. John Collins, head of the International Drug Policy Institute at the London School of Economics (LSE), says: “A more comprehensive approach to managing the overdose crisis in the US is needed, not simply relying on control of supply from abroad.” That is also China’s argument. China says the U.S. needs to address its growing need for such drugs instead of blaming Beijing.

Few people using drugs like heroin or cocaine test their substances. This means shady dealers can easily slip much less expensive fentanyl into the drugs often without the user’s knowledge. 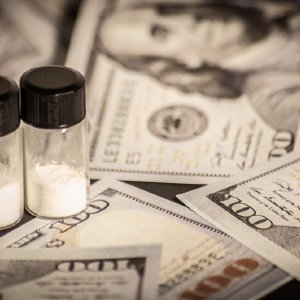