Summer is the favorite time of the year for many, but for parents of teens, it can be a time to be cautious and to pay close attention to the type of fun your child is having. According to a new study, more people try Ecstasy, LSD, cocaine, and marijuana during the summer than at any other time of the year.

Dr. Joseph Palamar, the lead author of the recent study attributed this rise in experimentation to an increase in idle time as well as increased time spent around more people. These factors could be the cause of over a third of all LSD use starting during the summer months. There is a 30% increase in Ecstasy and marijuana first-time use, with 28% of first-time cocaine use happening during the summer months.

“People aren’t working like crazy, ….. if you’re going out, maybe just because of the warmer weather, you might be
hanging out with people more.”

“People aren’t working like crazy, ….. if you’re going out, maybe just because of the warmer weather, you might be hanging out with people more.”—Dr. Joseph Palamar Professor at the NYU School of Medicine

Dr. Palamar goes on to talk about how risky the use of Ecstasy during the summer months can be. The mix of the high temperatures with the drug puts users at a higher risk of heatstroke. This, combined with the types of events in which Ecstasy is prevalent, makes a dangerous cocktail. Summer is a peak season for EDM (Electronic Dance Music) festivals and concerts where the drugs can be common.

The dancing, increased perspiration, drug use, and lack of rest from two to three-day festivals can increase the chances of an accident. In 2013, two young attendees of New York’s Electric Zoo died due to drug-related circumstances, while another four were hospitalized. This prompted the festival to cancel its last day. The festival responded and took initiative requiring that all attendees watch an anti-drug video.

There are several cases of hospitalizations related to these types of events, however, there are plenty who responsibly attend these events and do not partake in experimenting with drugs. If your teen is planning on attending an EDM event it would be advised you have a talk to your kid about substance use. In fact, with it being summer still, it might be a good idea to have this talk with them regardless of an event or not.

In addition, it is a good idea to keep an eye out for signs of drug use, like dilated pupils, red eyes, hallucinations, being extremely over-affectionate, abnormal sleep patterns, mood swings, and any other strange behavior. Now keep in mind that one of these signs by itself may not be cause for concern. For instance, teens commonly have abnormal sleep patterns. However, if you begin to see several signs together, it may be cause for concern.

If you are concerned your teen might already be experimenting with drugs, we have several articles on the signs of drug abuse below.

The phone rings and she lifts the receiver to her ear. It’s another recorded message from the school saying her son was absent from class today. She yells through the house for her son James. No answer comes back. James is a fourteen-year-old in his freshman year of high school. 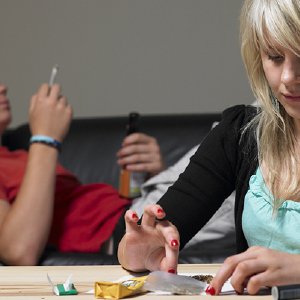