Reaching Out After Relapse

Preventing relapse can be a big part of recovery, including knowing the signs of this and how to address these issues if you find yourself slipping. For those in recovery, going through a relapse can be extremely humiliating. They can be embarrassed and upset that they have failed to stick to their goals of long-term sobriety. I went through a relapse, and I wanted to share what I think would have had an influence on how things happened.

One of the first things I noticed after I got sober again was that there were signs before I relapsed that I was heading in that direction. These are the early signs that I was on my way to a relapse:

The first thing that happened before I relapsed was I began to feel emotionally unstable. One should not be actively thinking about using drugs or alcohol. However, their emotions and behaviors may be setting them up for relapse on down the road. This can easily happen through boredom and isolation, especially in early recovery, as for some, downtime prior to recovery was used to get drugs and use them. This is what I was going through before I relapsed, and I believe if I had addressed this earlier, I may have avoided relapsing.

The next thing that changed for me was my mentality. Mentally I began to feel torn between wanting to stay sober and wanting to use again. This stemmed from being under stress or overwhelmed, experiencing conflict in my relationships or ongoing situations that had not been managed. I began thinking and mentally solving the problems the same way I had when I was using in the past.

After this came the choice to use, followed by the loss of my self-control as I gave into the idea it was already too late, despite the adverse consequences. This created a downward spiral for me. Tolerance increases, then physical dependence occurs, and the addiction is activated, and before you know it, you are in a full-blown relapse.

For me, you could say I experienced a fourth step on my journey downward; I relapsed, and I continued to hide my relapse and pretend everything was fine. I let the issue drag out once again like it did in the past. This can go on until things can get much worse. This is when you can really start doing damage to your life, get in legal trouble and even destroy your relationships.

Reaching out after a relapse can be extremely difficult. If I had done something about the situation during any of the steps I described above, things may have been different. As someone who takes immense pride in myself, pride almost ended my life. Here is a small back story about me. I had five and a half years clean and sober. I became complacent in recovery and had developed the idea that I was “fixed” and no longer had to worry about becoming addicted to any substance due to the length of time I had under my belt.

During my relapse, I attempted to hide my drug use in any way I could. I knew I was in trouble, and yet I said nothing. In my mind, I would be letting my husband, family, and friends down when in fact, I was letting myself down. I was ashamed and did not want to face the embarrassment and humiliation. I felt like a failure and was not willing to admit to anyone I had relapsed. I now know that was the addiction talking.

My family and friends knew something was not right when I would sometime slur my speech, look tired or, at times, all around unwell. When someone would check in on me, I assured them all was well when I knew I was not. I put a smile on my face, lied to everyone around me, including myself and went about my day as if nothing were wrong when in fact, I was making excuses for my drug use to be “ok.” I was telling myself, “It’s not that bad,” as a solution to not seek help for a problem. My life had become unmanageable and was crashing down around me; family, work, my social life, financial issues, my mental health, and my health as a whole. I then knew I could not get sober on my own.

I had to put aside my pride, not be scared of rejection, and come to the realization it was not too late to get back on track. There is a saying, “No one said it would be easy. They just said it would be worth it.” I called for help and got clean. I am now functioning at a higher level of life and relieved the struggle is now behind me. Asking for help not only saved my life, but it also improved my loved ones’ lives as well. If you are struggling, pick up the phone and ask for help. I promise you there is a way out.

Addiction and Relapse drug free for good Help for Self
AUTHOR

Narconon New Life Graduate gives back to program that changed his life. Christopher began his journey in recovery only a few months ago and decided to give back by holding a quarter marathon to raise funds. 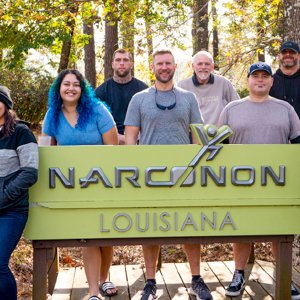 Becoming the Husband and Father My Wife and Daughter Deserve

On December 28, 2018, I arrived at Narconon New life Retreat and had no clue what to expect, especially since this was the first time I had ever been to rehab. I immediately checked into withdrawal and began getting my vitals and was delivered ’locationals’ and given assists.