Diego Maradona was on top of the soccer world. Yet, while success accompanied him on the field, problems increased off it and eventually his antics caught up with him.

Often criticized for being lazy and lacking motivation, he was fined around seventy thousand dollars for constantly missing practices and games. A super-talented soccer player from a very early age, he didn’t make any effort to continue improving. He often found himself partying in the nightlife of Naples instead of being dedicated to soccer and to the Napoli team.

His weekly routine would include playing a league game on Sundays followed by an extravagant binge of alcohol and cocaine all the way through to Wednesday. After that, he would do a “cleanse” in order to sweat out all the toxins from the drugs and alcohol consumed in the days prior. The cleanse would finish just in time for the following Sunday’s game.

“Any problem you have is my problem.”

His cocaine use also took a turn for the worse as he started interacting with members of the Italian mafia. The Camorra crime syndicate would become his main supplier of cocaine and prostitutes. In their eyes, Maradona was the savior of Napoli. Before he joined the club, Napoli was looked down upon by the richer Italian clubs but after Diego Maradona’s arrival on the scene, this changed. He was looked upon as an idol and savior. Diego partied with the higher-ups of the crime families. Rolex watches, the most beautiful women and trays of cocaine were brought to him free of charge. Diego fathered an illegitimate son with a woman he met at one of the many parties. The Camorra told him, “Any problem you have is my problem.” That would come back to haunt him.

All the perks that came from being an idol quickly faded when his country, Argentina, knocked out Italy in the semi-finals of the 1990 World Cup. Scoring for the “wrong team” cost him his protection again FIFA-mandated drug tests. In March 1991, Diego failed one for cocaine and was given a 15-month suspension from soccer. Around that time, the police were investigating his manager for drug trafficking. In a wiretap, his cocaine use was officially made known. This was already rumored when, in an all-star game in 1986, he was shown on camera sniffing something out of a bag. The wiretap would be one of the last straws that destroyed Diego Maradona’s career.

He quickly turned from a god into the devil. By the end of Diego’s career in Italy, his performance was suffering due to his drug use and weight gain. He left Italy after his ban and to this day, he still apparently owes the Italian government over 32 million pounds in unpaid taxes.

To make matters worse, Diego was arrested in Argentina for possession of cocaine. He was given a “slap on the wrist” and a 14-month suspended sentence. Then another scandal emerged where he shot at paparazzi outside his home in Buenos Aires.

In 1993, he returned to the soccer field and in the 1994 World Cup held in the United States, Diego scored a stunning goal and was seen celebrating in an intoxicated state of mind. His eyes were bulging out of his sockets—clearly indicating he was under the influence. He was given a drug test after the group stage which he failed for having taken a banned substance named ephedrine. Continuing to play for Argentina until 1997, he failed yet another drug test for cocaine and at that point, he retired from soccer.

His struggles with health due to his extravagant lifestyle continued. He gained an enormous amount of weight. He had an overdose in the year 2000, followed by a heart attack in 2004. He was also diagnosed with hepatitis is 2007. In 2018 he gained even more notoriety when he was seen nodding in and out in the stands at the World Cup game between Argentina and Nigeria. He was also caught on camera celebrating excessively and having to be taken by paramedics after losing consciousness.

Diego Maradona was known as one of the best soccer players to have ever played the game. He stands alongside such greats as Pele, Lionel Messi, and Cristiano Ronaldo.

In recent years, Diego has stated that he is no longer using drugs and drinking and that he has never felt better. Would he have been one tier above the rest if he had not engaged in all those illicit activities and scandals, but rather, concentrated more on playing soccer? He likes to think so.

“Do you know what kind of player I would’ve been
if I had not used cocaine?”

In an interview given in 2008 he said, “Do you know what kind of player I would’ve been if I had not used cocaine? What a player we’ve lost! I have a sour taste in my mouth because I could have been a lot bigger! I assure you of that! I knew who I was going to be, what I didn’t know was that I was going to take cocaine.”

By his own words, there is no question as to the heights he achieved—but those he did not.

Read Part I of this article.

The Original Lionel Messi: Rise and Fall of Diego Maradona—Part I

It is no surprise drugs hold us back from the best person we can be. Drugs distract us from what we aspire to be and cause a person to have a failed purpose in life. 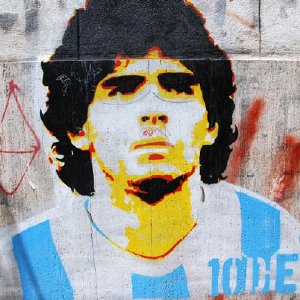