It is no surprise drugs hold us back from the best person we can be. Drugs distract us from what we aspire to be and cause a person to have a failed purpose in life. People may justify using drugs by giving examples of famous or successful people who use drugs with no apparent trouble. However, we do not always know what goes on behind closed doors. Here is the story of Diego Armando Maradona and his struggle with cocaine.

Diego Maradona was born on October 30th, 1960 in the city of Buenos Aires, Argentina. Born into a humble family, Maradona picked up soccer from the age of three. His father was a bricklayer and a factory worker who often struggled in raising Diego and his seven brothers and sisters. By the age of nine, he had distinguished himself as one of the best upcoming players. One article even quoted Diego as “a kid with the attitude and talent of a star.”

In 1976, just a few days from his 16th birthday, Diego made his professional debut for an Argentinian team named Argentinos Juniors. He became the youngest player to make a professional debut—a record that would stand until 2003. He made himself known for his impressive awareness, vision, footwork, dribbling, passing skills, and the ability to find space for himself and his teammates. Diego was called up to the Argentina national soccer team and impressed again in his debut. After five years, Diego received an offer from the team of his dreams, Boca Juniors. He scored a goal on his debut and led Boca Juniors to a league title. That would be the first and only league title he would win in Argentina.

Due to that successful season and a great spell at the 1982 World Cup, Diego received worldwide recognition and then a world record transfer to FC Barcelona—one of the most successful teams in Spain. In 1983, Maradona led Barcelona to two league cups versus rivals Real Madrid and Athletic Bilbao. This was not without controversy. He was very problematic both on and off the field. He was very volatile got involved in various fights—especially in the league cup final of 1983-84. Later that year, he transferred to Italian side Napoli and in that same year, he reportedly started using cocaine.

At Napoli, Maradona was given the role of team captain and while he was reaching the peak of his club career, he also achieved success with the national team in the 1986 World Cup and played a major role in helping Argentina become world champions. Diego was voted best player of the tournament.

After the World Cup of 1986, Maradona led Napoli to their first-ever championship in their history. Before Maradona, no team from southern Italy had ever won the league title. He led them to another league title, four cups, and a couple of league runner-up finishes in the years that led to the World Cup of 1990. At the 1990 World Cup, he captained Argentina all the way to the final. Diego Armando Maradona had attained success with both club and country and was the best player in the world at that time. He was on top of the world….

Read Part II of this article.

Diego Maradona was on top of the world yet as success accompanied him on the field, problems increased off it. Eventually his antics caught up to him. 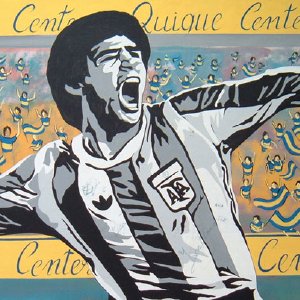