Let’s Get Real About Kratom

This might upset you. If it does, either you’ve been misinformed or you’re fooling yourself. If you are infuriated, then you’re probably an addict and I am touching a nerve by pointing out what you already know to be true but don’t want to admit.

Kratom is a tropical plant whose leaves contain Mitragynine and Hydroxymitragynine. In February, the FDA declared it to be an Opioid. An Opioid is a drug that acts on the brain’s receptors in the same way as true opiates such as Morphine. Oxycodone and Fentanyl are other examples of Opioids. All Opioids are addictive and over time, create dependence and subsequent withdrawal symptoms when the person stops taking them.

If you’ve been indoctrinated into America’s latest craze, you’re going to tell me that Kratom is a wonderful substance sent from the heavens and that it’s natural. You’ll tell me it’s a miracle and has made your life so much better, and I don’t know what I’m talking about and am spreading lies. It’s fine, I’ve heard all of that already.

I’ve also heard very similar things years ago when Suboxone first came out, and before that it was Methadone. Originally, heroin was marketed and sold by Bayer Pharmaceutical (the Aspirin manufacturer) after Laudanum and Opium were found to be “too habit-forming”. And though none of us were around when Opium resin was first scraped from poppy flowers, I’m sure that it was then labeled a natural, miracle-cure as well.

So here we go again. The problem is that Kratom is too new to have restrictions or much research behind it. People who want to make money prey on the naïve by marketing it and putting it in little baggies at gas stations that say, “not for human consumption.” This stuff is flying off the shelves as we speak. Seriously, go on Google right now and type in “kratom” and the top suggested search is “kratom near me.”

Are you starting to see where I’m going with this? It’s literally insane that we have yet another Opioid “solution” in our country and SO many people have been duped into thinking it will be different this time. We’re in the middle of an Opioid epidemic right now and we’re buying this?

The most recent debacle of Tramadol, a drug originally marketed as a non-narcotic alternative to Opioids, turned out to be just another addictive drug that people are now committing serious crimes to get their hands on. Addicts are literally breaking their pets’ legs so their Veterinarian will prescribe Tramadol. Then, they’re eating their wounded dog’s pain pills. I couldn’t make that up.

The target population for Kratom seems to be those affected by opiate addiction, because
a) They already buy drugs, and b) It “solves” their problem because it relieves withdrawal symptoms of other opiates. Of course, it does. It’s an Opioid. Don’t pay any attention to the fact it’s also being marketed as a “relaxing herb,” a diet pill, a pain reliever, and a remedy for alcoholism.

So, here’s where I’m calling B.S. If you’re pro-kratom and going to tell me because it’s a “natural” plant that it is safe, I challenge you to look at the history of cocaine, morphine, and alcohol, all of which are derived from…. plants. And, if you’re going to tell me that it’s non-addictive, I don’t want to hear it from someone who takes kratom daily because, let’s face it, YOU’RE TAKING KRATOM DAILY! Do I really need to explain why that’s illogical?

I work at a substance abuse treatment center where, as I write this, people who have gotten hooked on Kratom are seeking help. And yes, they have withdrawal symptoms. Someone who I knew well, an ex-heroin addict, relapsed on Kratom and hid it from his wife for over a year. He wound up sending them into debt, losing their house and his job, and was nearly divorced before he went back to rehab!

So, let’s get real. Of course, people who are on Kratom are all for it. They’ll tell you it got them off heroin and saved their lives, which I understand is a good thing. But let’s REALLY be honest about the fact that taking drugs to get off drugs is still taking drugs. Beer is not a miracle-cure for Vodka addiction and the argument that it’s less potent so somehow is better just doesn’t hold water.

Let’s stop lying to ourselves and spreading false ideas by marketing addictive substances that mess people up as being anything other than what they are; a less potent but still addictive Opioid that you can currently purchase easily without regulation or restriction. Kratom isn’t a miracle-cure. It’s just the latest drug to be pushed forth into a society that’s already in the grips of addiction and self-deception.

kratom kratom is an opioid
AUTHOR

The U.S. Food and Drug Administration and the CDC, along with several local and state agencies started an investigation into kratom products spreading salmonella.

Back in November of 2016, the DEA postponed their decision to schedule kratom as a Schedule 1 drug. Schedule I drugs, substances, or chemicals are defined as drugs with no acceptable medical use and a high potential for abuse. 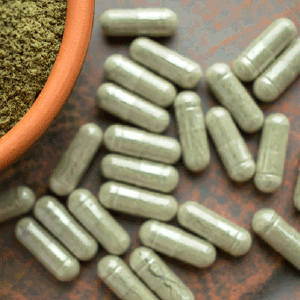